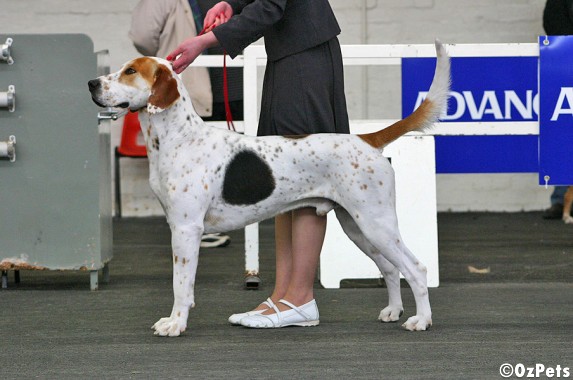 The English Foxhound is about 21-25 inches tall to the withers, and weighs anywhere between 65-75 pounds, although some English Foxhounds bred for the show ring can be considerably bigger, with some males weighing over 100 pounds and recognised standard height being approx. 58-64 cms (23-25 ins). The skull is wide, the muzzle is long, and eyes carry a sweet expression. The legs are muscular, straight-boned, and the paws are rounded, almost cat-like.

Temperament
The English Foxhound was originally a pack hound, therefore, it gets along well with other dogs and enjoys human companionship. It gets along with horses, children, and other pets, as it is a gentle, social, and tolerant breed. 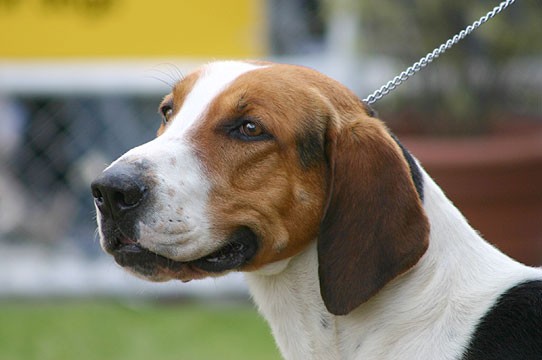 It is a very active breed that enjoys the hunt. Though it is slower than the American Foxhound it enjoys running and will run all day with very few breaks in between.

Health and lifespan
There are very few health factors in this breed. Occasionally seen are chronic hip dysplasia, renal disease, and epilepsy. The breed's lifespan is typically 10-13 years, although British hunts would routinely put working hounds down after 6-7 years hunting.

History
A pack of English FoxhoundsThe English Foxhound was created in the late 1500s, as a result of the perception of the depletion of deer in England. Nobles and Royalty had hunted deer for both food and sport, using the Deerhound or Staghound for this purpose. During the reign of Henry VIII, it was perceived that a new prey was needed, and the fox was selected. The English Foxhound was then created by a careful mixing of the Greyhound, for speed, the Fox Terrier, for hunting instinct, and the Bulldog, for tenacity in the hunt.

Studbooks for this breed were kept as early as the 1800s.

The dogs were meant to trail foxes and live around horses. They are still used for those purposes. 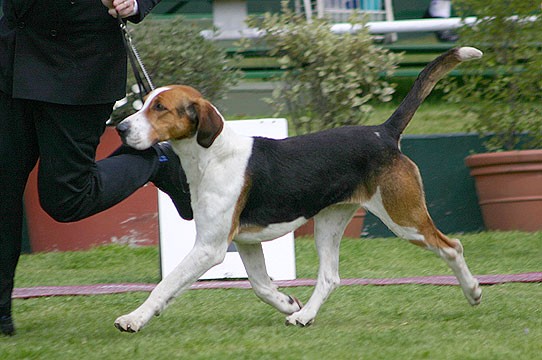 Exercise
The English Foxhound is a very energetic breed. It needs plenty of exercise. This breed needs area to run. If confined to a small area, the foxhound may become destructive. The apartment life is not one for the English Foxhound, but the breed can thrive in a suburban setting, given the proper exercise and attention.